Lochwood Tower (or Lockwood Castle), the seat of the Johnstone Clan, lies a few miles southwest of Moffat in Dumfriesshire, Scotland. It is located in upper Annandale,the valley of the Annan River, which originates in the Devil’s Beef Tub north of Moffat and flows south some thirty miles to the Solway Firth near Annan. Lochwood is situated in the Parish of Johnstone, which takes its name from (or gave its name to) Lochwood’s owners. The name “Lochwood” is derived from a forest (wood) near an ancient lake (loch), which later became a bog known as Lochwood Moss. Parts of the forest still exist in the form of thousand-year-old oak trees (the”Royal Oaks”) which grow adjacent to the Lochwood Tower site.

NOTE: As of November 2002, Lochwood has been fenced off for reasons relating to public liability. Although the ruins are visible from the road it is not possible to go into the ruins, which are subject to falling rocks and possible collapse. 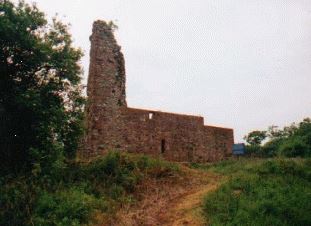 Today Lochwood is in an advanced state of ruin. The original mortar was evidently of poor quality and, after Lochwood was abandoned as a residence, farmers probably pillaged the site for building materials. During the 1960s, Alastair M.T. Maxwell-Irving, FSA Scot. cleared away much of the vegetation growing on the ruin and conducted an archeological survey. He also made several drawings of the site plan of Lochwood and published a paper in the Transactions of the Dumfries & Galloway Natural History and Antiquarian Society. Mr. Maxwell-Irving also wrote a sequel to his article, which was never published, and noted that the outlines of Lochwood’s walls could be preserved to prevent further deterioration. Below is a drawing of the Lochwood site from the Royal Commission on the Ancient and Historical Monuments of Scotland, which is similar to drawings made by Mr. Maxwell-Irving: 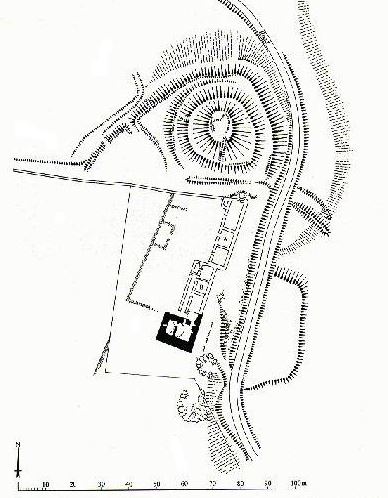 Below is a portion of a map of the Lochwood site from 1785, made when the neighboring farms were being created in connection with the agricultural revolution. This map was also furnished by Mr. Maxwell-Irving, and is rotated so that north is the top of the picture. The ruins of the castle are inside a rectangular enclosure. Note that the outline of the east range of buildings was very prominent in 1785. 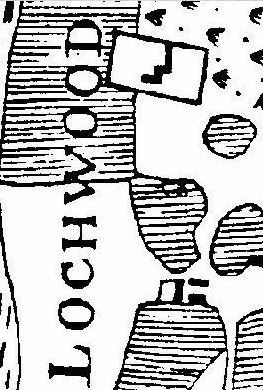 During the 1980s, the present Chief of the Johnstones, the Earl of Annandale and Hartfell, cleared away the rubble caused by the collapsing tower, restored the two-chambered vaulted basement (one of which chambers was the dungeon), and cemented the remaining walls firmly in place. At this time he found various artifacts, including the original iron yett (gate) to Lochwood. Only part of the first story remains, but the layout of the site has been preserved.

There is only one known comtemporary drawing of the castle while it was inhabited. This is a rough, thumbnail sketch of Lochwood from the south, or tower end, on an English military map of 1547 called the Platte of Castlemilk. The sketch on the map is labeled “loithwood the lardjohnestoun.” A detail from the map is shown below.

In 1547 the English soldier Sir Thomas Carleton described Lochwood as “a fair large tower with a barnekin (surrounding stone wall), hall, kitchen and stables all within the barnekin.” On the outside, the tower measures 43 feet 4 inches from east to west, and 34 feet from north to south. The floor plan of the tower was slighly L-shaped, with a spiral staircase in a wing in the northeast corner. The remains of the courtyard, surrounded by the barnekin, averages approximately 150 feet from north to south, and 95 feet from east to west. A concise description of this type of border fortress is contained in Sir Walter Scott’s introductionto his Minstrelsy of the Scottish Border:

[T]he residence of the chieftain was commonly a large square battlemented tower, called a keep or peel, placed on a precipice, or on the banks of a torrent, and if the ground would permit, surrounded by a moat. In short, the situation of a border house, encompassed by woods and rendered almost inaccessible by torrents, by rocks, or by morasses, sufficiently indicated the pursuits and apprehensions of its inhabitants…. No wonder, therefore, that James V, on approaching the castle of Lochwood, the ancient seat of the Johnstones, is said to have exclaimed,

“that he who built it must have been a knave in his heart. “

The walls of these fortresses were of an immense thickness, and they could easily be defended against any small force; more especially, as the rooms being vaulted, each storyformed a separate lodgement capable of being held out for a considerable time.